The Flood Action Plan (FAP) relies on huge levees along the rivers’ length. At an estimated US$10 x10^9 they could take 100 years to build. Up to 8000 km of levees are planned for the 1600 km of river in Bangladesh. They are not able to withstand the most severe flooding, such as in 1987, 1998 or 2007. The embankments contain sluices to reduce water flow and to control damage caused by flooding.

They are set back from the river, which protects them from constant erosion and is also cheaper to install.

The FAP still has many issues:

The rivers are largely controlled by factors outside the country. Floods in Bangladesh are also not just related to rivers, and the rivers are needed for agriculture and other industries.

The FAP has overall led to social, environmental and economic issues within the Bangladeshi population. 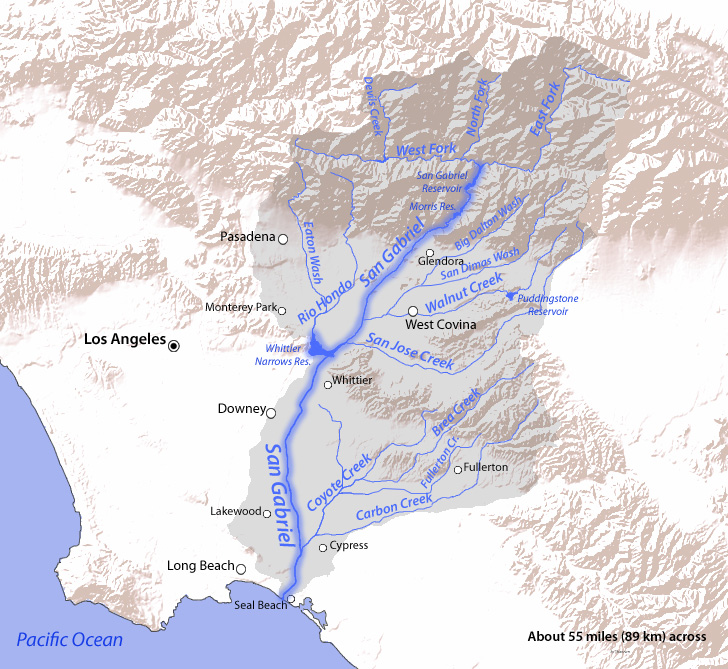 The San Gabriel river is situated in California, and runs through Los Angeles. It has the most extensive water control system in the world, in a basin 3,000 km^2.

The Ovens lake is 400km from LA, Sacremento river is 600km away and Parker Dam is 400km away. Between them 300 million m^3 of water is transported to LA daily.

Problems regarding the river- why is flood control needed?

The headwaters where the San Gabriel starts are in mountains up to 3,000 m high. The valleys are unstable and steep-sided. They are fairly straight with gullying along hillsides; overall they are v-shaped with a steep gradient.

Where the valleys meet with the lowlands below, there are large alluvial fans of depositional material, and there was, previously, large amounts of river braiding.

In 1938 there was a flood of the San Gabriel due to a lack of river controls. This was during the economic depression that affected much of the world, so there simply wasn’t funding to help prevent flooding. There was also less money available to build so that structures could withstand flooding. 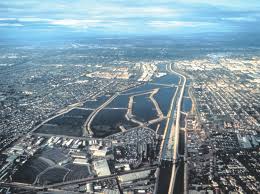 The Los Angeles Flood Control Authority was set up in 1915, after flooding in 1914. The first flood control works started in 1917. There are five main components (listed in order from the headwaters):

Only 2% of the rainwater within the San Gabriel basin ever reaches the sea. The rest percolates into permeable rocks, evaporates, or is used by people.

The dams have to be emptied after rain to remove the debris. The debris is either dumped elsewhere or used as aggregate for engineering.

The Whittier Narrows are an example of a site where a single dam has blocked two tributaries.

One of the large dams is the Santa Fe dam, which is 7 km long and contains an area of water of 445 hectares. 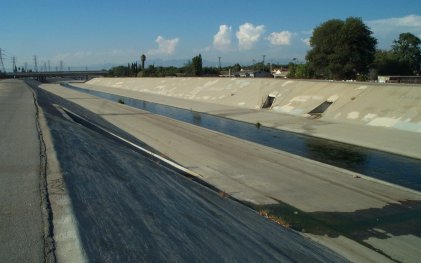 Issues with the management

Worth Farm is located near Crawley and the M23 motorway. An embankment dam 6.5m tall has been built along the farm. No water is stored in the reservoir through most of the year, and the land can be used for farming, mostly of cattle.

During floods, the water in the Mole that would normally just flow under the embankment is captured and held, creating a reservoir. Over a few days, this water slowly drains out.

Water level can rise by 3.5m behind the embankment, which is predicted to occur 20% of years, while reaching peak capacity is predicted to happen once every 200 years on average. 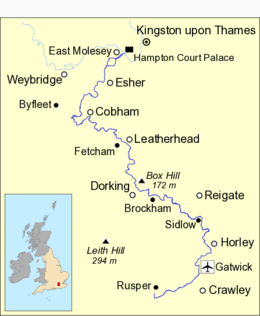 Much of the area is on impermeable clays, and is mostly flat. Because of the characteristics of the area, flooding can last for 3 days after any storms are gone.

Although naturally being a small river,the Mole has the potential to cause major disruptions due to having several major transport routes, namely Gatwick airport, East Surrey Hospital, the M25 and M23, and the London-Brighton railway housed (at least partially) within it. Below are the specific impacts of the 12/13-01/14 floods:

The Gatwick flooding scheme and other factors will be mentioned elsewhere as this post is already long.

(Image sources: https://rgsweather.com/2014/01/04/flooding-on-the-river-mole-surrey-causes-and-management/ https://en.wikipedia.org/wiki/River_Mole I would highly recommend the http://www.rgsweather.com site – and not just because it’s run by one of my geography teachers- it is genuinely a very good site!)

The River Tees is located in the North East of England.

The Tees’ source is located in the Pennines close to Cross Fell, at 893 metres above sea level, where roughly 1200mm rainfall occurs annually, although some areas have 2000mm. It is 100km long.

In the upper course of the river is a famous waterfall known as “High Force” as well as a gorge accompanying it. High Force is 21m high, and has been formed over millions of years. The top of the waterfall is made from a very tough rock called “Winstone”. Below the winstone lie layers of limestone, sandstone and shale. The river erodes rapidly through the rocks at the bottom, due to their being relatively soft, and eventually, once a large enough overhang has been created, the rocks collapse downwards under gravity, and create a sheer rock face for the waterfall to flow down. 20m^3second^-1 runs across the winstone rock.

High Force also creates potholes nearby. Smaller rocks are rotated by the river’s flow after being trapped in depressions in the rock and eventually wear downwards to make round, deep holes.

Close to Yarm, the Tees forms large meanders, which have formed ox-bow lakes. Flooding has caused the formation of levees.

During the last ice age, water was locked up on land, meaning that sea levels were lower. When sea levels rose, the river was rejuvenated, meaning that it tried to achieve a natural long profile again (of a long and mostly gentle curve from the source to the mouth). The adjustments created knick points, most notably High Force, which is eroding back to form a new long profile, but this process has also caused an estuary to be made as the sea flooded the original mouth of the river.

Parts of the estuary area are SSSIs (Sites of Special Scientific Interest) (which are carefully managed due to holding unique ecosystems such as seal sands), or are just generally important for the local wildlife, notably migratory birds and seals.

The flat estuary area is also attractive to large industries due to the flat land, and the fact that the river is quite wide, allowing container ships to their premises easily.

The Tees takes large meanders through its middle course. Directly, it is 30km from Darlington to Teesmouth, but along the river it is 75km. Several miles have even been cut off from the original course to shorten boat journeys.

The Tees is used for water-sport, for the protection of wildlife habitats, for farming in the fertile alluvial soil, and for big industries, as well as for residential use.

Sheep Farming: (Upper course): The land in the upper course is too steep for machinery and too acidic for crops, so is instead used for sheep.

Tourism and conservation: (Upper course). The moorland, High Force, shooting etates, and a nature trail at Windybank Fell all atract visiots, as do the Pennine Way, and the rural villages of the area. Tourism provides jobs and helps stimulate the economy, but also causes congestion, litter, and overcrowding.

Seal Sands: (Lower course). The mudflats around the river mouth are very important for seals and for migratory birds.

Urban and Industrial use: (Lower course). Large towns such as Stockton and Middleborough and Teesdale support large industries such as chemical industries, ships, steel-making and engineering.

Shipbuilding has been replaced by oil platform construction.

The management of the Tees has various aims:

Reservoirs, such as Cow Green and Grassholme have been built.

In the 19th century, cut-offs were built around Stockton to straighten the river, and flood protection schemes have been built recently at Yarm. There is also a water sports complex at the Tees barrage.

Yarm used to be a huge port town, enclosed by a meander. However, it was difficult for boats to travel 18km inland on the Tees. Commerce was broken off by a bridge closer to the sea at Stockton. The Victorians saw too many meanders and built a 3km long straight channel.

The estuary used to be a marsh area but is now almost entirely artificial. Heavy industries reside on the reclaimed estuary mud. There is space and access to open water, so it is used by North Sea oil and petrol companies, and by a nuclear power station. 90% of the raw materials for these are carried from outside because the channel is deep enough for the them.

(PS: I promise that I won’t do so much explaining of processes once I’ve explained it once!)